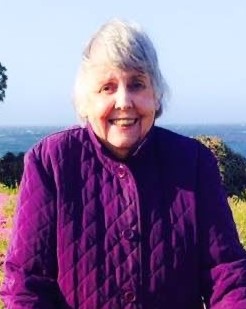 Bette Jean Ritchie, wife of Lt Colonel Howard Ritchie, passed away peacefully on February 14 2020. Bette, from Littleton, was born March 21 1935, daughter of Kelly Cash and Sadie Watkins, and grew up on Mount Adams in Cincinnati, Ohio. She had a fun and adventurous childhood that she shared with her four siblings. Bette married her childhood friend Howard and her life changed forever as she took on the role of military wife. Together they lived all over the United States and in Germany. Joining them on their journeys were their five children:  Robert, David, Gena, Mike, and Lori. The family eventually settled in the 1970s on Ken Caryl Ranch outside of Denver, where Bette and Howard  lived until Howard’s passing in 2014. Bette was a devoted mom. She loved travelling especially with her sister Sonnie, best friend Grace Inlo-Potraafke and her daughter Lori. The four enjoyed their trips to Monterey California each year as well as other places around the US. Bette also loved shopping, reading, photography, gambling, visiting family in Ohio and Kentucky and in recent years, spending time with her grandchildren and great grandchildren. Bette leaves behind sisters June Kling (Howard) of Cincinnati Ohio, Sondra Vach of Cincinnati Ohio, brothers Richard Watkins (Norma) of Glendale Arizona, Robert Watkins (Myra) of San Francisco California, children Robert Ritchie (Phyllis) of Littleton Colorado, Gena Fischer (Lee) of Steamboat Springs Colorado, Mike Ritchie (Ronette) of Littleton Colorado, and Lori Bricks (Michael) of Parker Colorado as well as grandchildren Kailey Gillane (Eric) of Ventura California, Kassidy Fischer of Bozeman Montana, Bryce Ritchie of Littleton Colorado, Jenae Ritchie of Littleton Colorado, Dylan Peppelaar of Littleton Colorado, and great granddaughters Wiley Gillane and Evie Gillane of Ventura California as well as many cousins, nieces and nephews who adored her. She was preceded in death by her husband Lt. Colonel Howard Ritchie, son David Ritchie and her parents.

The service will be at Fort Logan Cemetery, at 9:00am on February 21st. We will be gathering at Staging Area “A” at 8:30am sharp. A “Celebration of Life” party will be held at Lori and Michael Bricks’ home in Parker, Colorado the evening following the service. Please contact a family member for more information.

If you are sending flowers please arrange for them to be delivered to Horan and McConaty, 3101 S. Wadsworth Blvd, Lakewood Colorado 80227. Flowers need to be there no later than Thursday, February 20th. In lieu of flowers, you can make a donation to the American Cancer Society in honor of Bette Ritchie.