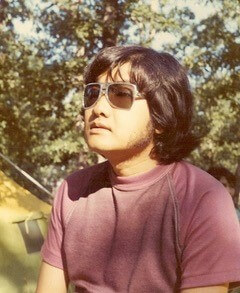 Carmelito (‘Lito’) Lugay Santos, 78, of Centennial, CO, passed away peacefully Thursday, November 14, 2019, surrounded by his family and lifelong friends. Lito’s earthly journey began on June 30, 1941 in Bacolor, Philippines. He was the eldest of 8 children of Librado and Emilia Santos who, as in life, paved his way to eternal life and who instilled in him his lifelong passion of putting others before himself.

Lito received his Bachelor of Arts in Accounting from The University of the East in Manila. While in Manila he met the beautiful Andrea Navarro and, after much courting on Lito’s part, the two were married in 1964. Opportunities in the United States called to him and, like the explorers of old that relied on their conviction based on the strength of their Faith, he crossed the Pacific Ocean in 1969 and landed in Kansas City, KS. He chose Kansas City because of the temperate weather it shared with his native Philippines. While in Kansas City, he plied his trade in the energy sector and was also an active member of the growing Filipino community helping found the Filipino Association of Greater Kansas City and serving as Vice President and Treasurer.

Lito moved to Aurora, CO in 1975 along with his wife and 4 children who had joined him from the Philippines. A devoted Catholic, he was an active member of Queen of Peace Catholic Church in Aurora. In 1993, as part of Pope John Paul II’s visit to Denver for World Youth Day, Lito had the immeasurable honor of singing for His Eminence during mass. He also continued his involvement within the Filipino community by serving in various roles for the Bayanihan and PASCO cultural groups.

Lito was an accountant by trade but was blessed with an artist’s soul and brilliance. He was a prolific painter, writer, sculptor and musician. He was featured in numerous publications for his work and his family and friends are now tasked with cataloging his works, which will be prolonged as they reminisce on his kindness, love and humor over each piece.

Along with his mother and father, holding the gates of heaven for him upon his arrival are sisters, Lutgarda and Maria Luisa and brother, Antonio. Remaining to continue his work and celebrate his life are his wife and rock of 55 years, Andrea, their children, Emilio, Ann, Roche’, Theresa, Hallel and their grandchildren, Alex, Gage, Logan, Samara, Emilia, Ben and Julia, sisters, Lourdes and Martha and brothers, Mario and Roberto.

Condolences may be expressed at www.horancares.com.