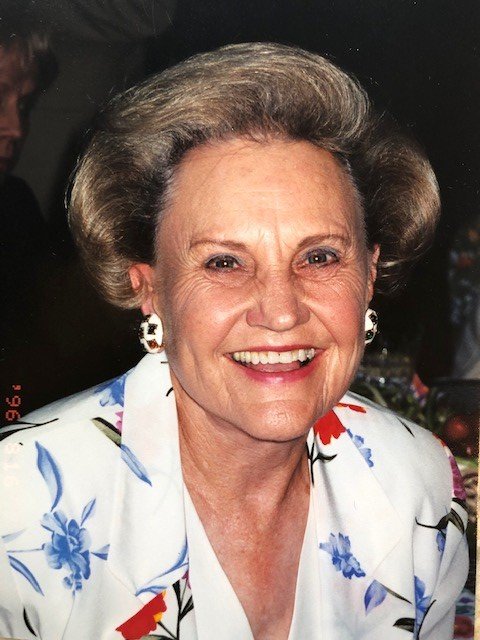 Dorothy Sue Miles Chamlee, age 96, died peacefully in her home on Saturday, March 14, 2020. Born October 23, 1923 in Midland, Texas, Sue was a legend, an icon, a matriarch. Sue Belle, as her closest friends and family would call her, was a force to be reckoned with. She was classy, independent, a hard worker, sophisticated, and demanded respect. She was the type of woman who wouldn’t be caught dead in anything less than an Escada pantsuit and diamond earrings at the grocery store. She had style, grace, and a sophistication that was unmatched. Her favorite color was yellow, her favorite holiday was Valentine’s Day, and every spring we would talk about how we couldn’t wait for the roses to start blooming. On Sundays, she would attend the 11:00am service at Wellshire Presbyterian Church in the 3rd row pew (unless, of course, there was a Bronco game on). She was a true southern belle with Texas Longhorn blood running through her veins and a West Texas twang that soothed the soul. She read Sports Illustrated and ESPN magazine on a regular basis and could out trivia even the greatest sports aficionado. She had a heart of gold who loved her friends and family with every fiber of her being. Her sense of humor would always catch you by surprise as her witty remarks seemed to seep out at the most unexpected (and sometimes inappropriate) times.
Sue was a longstanding member of Cherry Hills Country Club (70 years) and made sure that her black coffee was served piping hot in a large Cherry Hills mug after dinner and if it wasn’t, well, you’d be sorry. Sue was present for Arnold Palmer’s 1960 Cherry Hills US Open win where he staged the greatest comeback in U.S. Open history, erasing a seven-stroke deficit during the final round. Her legacy left behind the co-creation of the Hall of Champions, 2 “hole in ones” in 1968 and 1993, along with being awarded the “All Around Champion” in both Tennis and Golf in 1980.
Sue is survived by her daughter Jennie (Mark Bayless) Conifer, Colorado; her two granddaughters Linzy Higdon and Tracy (AJ Mitchell) Mounds View, Minnesota and 3 great grandchildren Callahan, Boston, and Penelope. She is also survived by her niece Suzy Boldrick Midland, Texas; her great niece Starr (Boyd Bauer) Beeville, Texas; her great nephew Miles (Laurie Boldrick) Midland Texas; great niece Kelly (Ben Barbour) Richmond, Virginia; and her great, great nieces and nephews Walker, Katie, and Jackson Bauer; Hayden and Blakeney Boldrick; and Boldrick and Crawford Barbour.
Sue was preceded in death by her husband Howard; her brother Jay who died in World War II; and her sister Margaret “Spooks” Starr, all of whom she will be laid to rest next to in Midland, Texas.
As all of this is just a drop in the bucket of Sue’s 96 years on this earth, we celebrate her legacy as a wife, sister, mother, daughter, grandmama, great grandmama, aunt, great aunt, and great, great aunt.
Burial services will be held in Midland, Texas, and a celebration of Sue’s life will be held in Denver, Colorado. Both dates, times, and locations will be provided at a later date.

Please leave a comment as condolence for her family below.