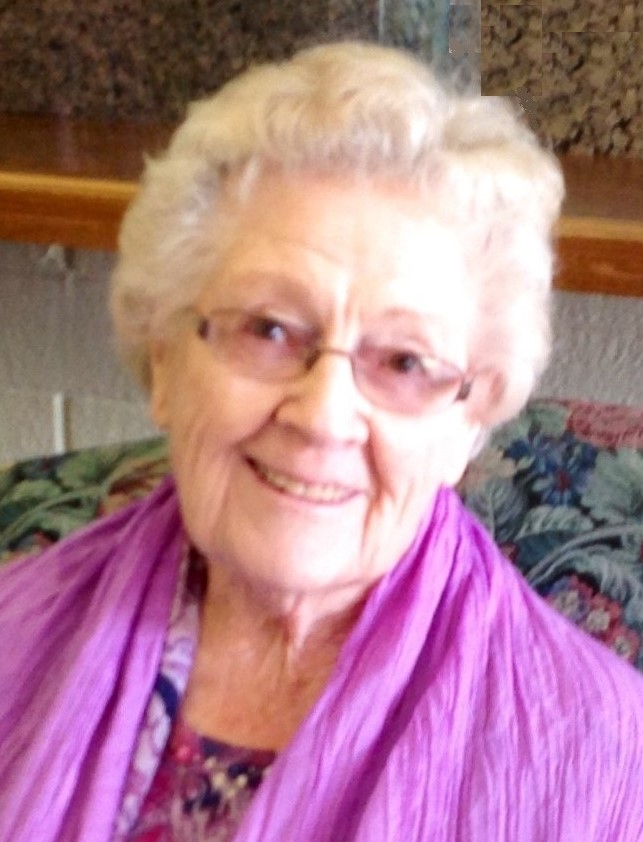 Gwyn Christiansen Petersen, 95, passed away peacefully in Littleton, Colorado, May 17, 2020. She was born March 10, 1925 in American Fork, Utah to Lenard Peter and Katie Durrant Christiansen.  She was an active member of The Church of Jesus Christ of Latter-Day Saints.

As a six-week-old baby, Gwyn’s father moved his family to Ely, Nevada and began working for the railroad.  Gwyn said her childhood was carefree and happy.  She knew and felt the love of her parents.

Gwyn’s early education was at East Ely Grade School.  She had a classmate in her early years whose name had the same spelling, “Gwen.”  Their papers were always getting mixed up so she decided to change the spelling of her name.  Thus, keeping “Gwyn” her remaining years. Gwyn graduated from White Pine High School in 1942.  Following graduation, Gwyn continued her education in Los Angeles CA, at Woodbury Business College.

She married Maun Tyre Petersen October 18, 1943 and their marriage was latter solemnized in 1944 in the Salt Lake City Temple. Gwyn loved her role as an officer’s wife.  She was able to travel with her sweetheart to Leadville, Colorado, Fort Sill, OK, and Salzburg, Austria. When WWII broke out, Maun was assigned to General Patton’s Thunderbolts in 1944. WWII ended and Maun wanted to see the country he was fighting in. He invited Gwyn and their first child Maun Jr to join him in Europe. Gwyn described that time as the most amazing year, for they lived life to the fullest.

November 1950, Gwyn’s husband received orders to join combat in Korea where he gave the final measure of his last devotion. Gwyn was 25 years old with two small children and one on the way.  She was blessed to be able to purchase a home near her parents in Ely, Nv.  Gwyn was not a quitter.

She said, “Death had been a tender teacher to me. Life is precious and fragile.  It must be cherished and treasured.”

Throughout her life, Gwyn proved she was a brave woman, always picking herself up and being the master of her fate.  She learned to rely upon the Lord for everything she did and then get up and do the work.  Gwyn proved her bravery.  In 1955 she purchased a 15-foot camping trailer, packed up her small children and drove across Nevada to Lake Tahoe.  For the next four years, Gwyn and her children spent the hot summers vacationing in Tahoe camping on the beaches and swimming.   Gwyn loved driving a boat alone in the early mornings on the smooth glass like water. Her all summer vacations became shorter as it became necessary to find employment.  but never missed at least a couple week of vacation at the lake. Those summer days at Lake Tahoe are precious memories for her children. When she wasn’t at Lake Tahoe, she was exploring and camping on the creeks round White Pine County. The camp trailer would be parked at a creek during the week and the family would return on the weekends.   Her favorite place while there was sitting in a lawn chair, in the middle of the creek, reading a book.  Her goal in life was to “live each day like it was her last.”

In 1959, Gwyn accepted her new responsibilities as a clerk for the Nevada Fish and Game, (Nevada Department of Wildlife). Her appreciation for the outdoors and wildlife continued to grow. She was the only woman in the office and she “set her standards.”  She called it “Working with the Guys!”  She gained respect from all she worked with. Gwyn accepted everything “the guys” threw at her including, typing “all” their reports; helicopter field trips to count elk, deer and antelope; tagging deer and checking tags before the hunters could leave the area; planting fish in the creeks and lakes; mothering small motherless wildlife that arrived at the office, some occasionally requiring over-night visits to her home, willingly. She was excited to share her love of animals with her children. She created many life-long friendships in her working career. Gwyn’s retirement came in 1988 after 29 years of service.

Gwyn, knowing her children all lived out of state,  once again demonstrated her bravery by moving in 2005 to Littleton CO at the age of 80. She was able to purchase a home very close to both daughters. Her remaining years were enjoyed getting to know each of her grandchildren and great grandchildren personally. She excitedly became known as “GG”, short for Grandma Gwyn, or Great Grandma Gwyn. Visits were not just for holidays and birthdays, for she made the most and loved all unexpected visits from them. Gwyn enjoyed keeping all the notes, pictures, home-made loving gifts she received through the years. GG left a great legacy. She will be missed!

Gwyn cherished her membership in The Church of Jesus Christ of Latter-Day Saints. She knew her Father in Heaven and her Savior Jesus Christ.  Throughout her life, she enjoyed serving as a chorister and teacher in the Primary organization. As Primary President she headed the “Penny Drive” for many years which raised money for the Primary Children’s Hospital. Gwyn taught the youth not only through lessons but by example as she served in the Young Women’s organization, then known as the MIA. She also served as a teacher and the Relief Society President in the Ely Second Ward, Ely Nevada Stake. She was a Visiting Teacher for over 70 years. She was respected and loved by many.

Gwyn was very proud of her memberships in “Ely’s Women’s Club” and the “Daughters of Utah Pioneers.” Gwyn was honored to be a member of the” Gold Star Wives of America,” which she earned when her husband gave his all for the United States of America.

​Families are Forever…  Gwyn was preceded in death by her parents, husband Maun and her son Maun T., brothers, Donald and David, sister Kathryn and a great grandchild Everest David Croft.  She is now happily reunited with her husband after 69 years and her son Maun Tyre Petersen Jr.  Gwyn is survived by:  her two daughters, Susan Kay (Dean) Martineau of Centennial, CO and Kathryn Ann Hansen of Littleton, CO; 19 grandchildren and 42 great-grandchildren.

To her family Gwyn penned: “For you sweet children, grandchildren and future posterity of mine:  know that Gramma Gwyn always has loved you and always will. I’ll never be far away. Remember who you are. I believe I have done the best I could.” – Grandma Gwyn, GG

Due to Covid 19, a private family memorial service was held in Colorado on May 21, 2020.
A graveside service preceded Gwyn’s burial at the Ely City Cemetery in Ely, Nevada on Wednesday, May 27, 2020 .