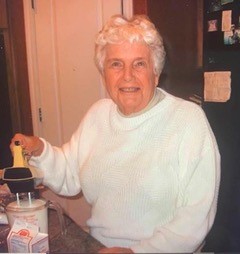 Jackie Click passed away on May 19, 2020 in Parker, Colorado.  She leaves behind a large family to cherish the memories of her life.  This includes her son, Paul (Zoila) Click of Aurora, CO and daughters Deborah (David) Dix of Aurora, CO, Dana (Jeff) Adams of Detroit, MI, Robyn Click of Denver, CO, and Leslie Click of Lakewood, CO.  Jackie was pre-deceased by her youngest daughter Suzanne Hagan, her brother George Smothers, Jr., and her parents Agnes and George Smothers.  She leaves behind 16 grandchildren, and 20 great-grandchildren.

Jackie was a champion for adults with developmental disabilities in Colorado. Her very successful career as a social worker spanned decades and included services for metropolitan Denver as well as the State of Colorado.  A pioneer, she successfully placed hundreds of institutionalized adults into group homes which in the 1970s was a new lifestyle for persons with developmental disabilities.  It is safe to say that Jackie impacted thousands of people throughout the years and improved the lives of an entire population for years to come.

During her retirement Jackie enjoyed traveling the world.  She was inquisitive, curious, and appreciative of different cultures and far-away countries.  She counted visits to China and Thailand as some of her favorite trips, among her many travels.  Jackie’s passport was always up to date.  She was especially happy to take trips with her grown children.

She possessed a strong Catholic faith and was an active volunteer at Church of the Risen Christ in Denver.  A member of the Silverado Club there, she made friends with fellow travelers and joined many of the club’s sponsored trips throughout Europe and North America.

Jackie was born and raised in Oklahoma where she attended the University of Tulsa.  It was there she met and married her former husband Kenny Click, who passed away in 2007.  She later earned her Bachelor of Science degree from Metropolitan State University in Denver, graduating the same month as her oldest daughter graduated from high school.

The biggest joys in her life were her six children, and she was happiest when all were gathered together.

Jackie will be laid to rest at Mt. Lindo in Morrison, Colorado.  Due to Covid-19, the celebration of her life will be held at a later date.

Donations may be made in her name to Developmental Disabilities Resource Center in Lakewood, Colorado.