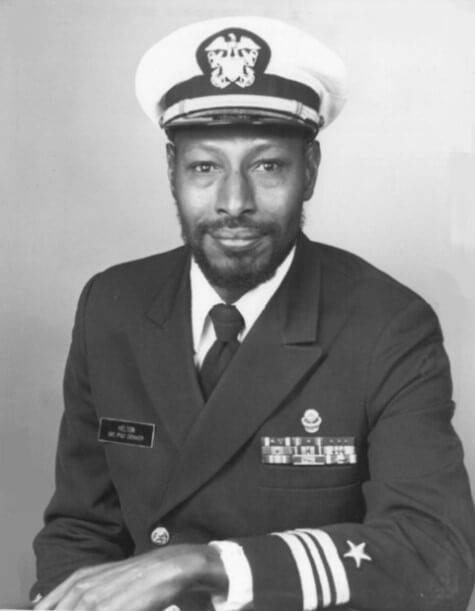 He was born on June 25, 1932 to Grady Helton and Lucille (Price) Gilbert in Dallas, Texas. As a result of the Great Drought, at age nine years, James and his mother migrated to California in search of new opportunities and eventually settled in Bakersfield.

While in high school, ‘Jim”, as he was lovingly referred to by most, excelled academically, particularly in math and science. His keen eye and creative hands would turn the plainest of wood into carved masterpieces; a life-long passion that began in woodshop. And, it was his participation in ROTC that would inspire him to pursue a naval career. Soon after his high school graduation, Jim accompanied a friend downtown and they both enlisted in the U.S. Coast Guard in 1950.

HONOR, COURAGE, COMMITMENT
In 1952, Jim enlisted in the U.S. Navy. A decision which would prove to be profound. As many can attest, he was truly a humble man. As many can attest, he was a man who often singularly faced great adversity with admirable dignity and grace, be it on land or out at sea. In doing so, many more who look like him can continue to realize their full potential.

He was one of the first African-American Diver in the Navy, and among the first to hold superior positions as an Air Boatswain, an Aircraft Fueling Officer and as an Aircraft Organizational Maintenance Officer, Aircraft Division. In the early 60s, Jim was instrumental in training SEALs for survival tactics. From the early 70s until his retirement, Jim was among the first African-American Equal Opportunity/Race Relations Officers and Public Affairs Officer, helping to establish mandated protocols and procedures during turbulent times in our nation’s history.

On January 14, 1969, fateful events took place culminating in one of the Navy’s biggest disasters on board the nuclear aircraft carrier, The Big E. With the ship ablaze from detonations and explosions from loaded missiles which had been inadvertently activated during trial runs, Jim Helton was responsible for leading the charge to extinguish the huge fires. For seven long and dangerous hours, Jim, along with his men and many others, kept up the fight and eventually won. Twenty-eight faithful men lost their lives and many were injured, including Jim.

His valor, courage, and leadership are chronicled in the book, ​Trial: Ordeal of the USS Enterprise ​by Michael Carlin; 1993. A subsequent National Geographic/Discovery Channel documentary entitled,Trial by Fire, portrays accounts of that day. Jim is featured prominently recounting events.

It is fair to say that this disaster left an indescribable mark on him and his love for Navy and Nation was deepened. In 1982, Jim retired with Honorable Discharge having served thirty meritorious years.

“NAVY. IT’S NOT JUST A JOB, IT’S AN ADVENTURE”
Those who knew Jim Helton knew that he was not one to idle time away. While in the Navy he pursued his college degree and obtained his Bachelor of Science in Environmental Studies from Regis College in 1984.

During his “retirement”, Jim pursued additional careers and volunteered for organizations that he felt were vital to a better society. In the 80s and 90s he became a Park Ranger and helped create trails and preserves as well as an educational program for visitors; served as a Deputy Sheriff (Reserve) for Jefferson County; devoted countless hours to The Birds of Prey Foundation and served as a docent at the Denver Zoo. In more recent years, Jim volunteered at the Rocky Mountain Wildlife Preserve providing school-aged children the opportunity to experience nature within their city. His love of travel and adventure is unparalleled. Although he would say, “ the Navy allowed me to see the world. I’ve been to most places”, he still made annual trips to various points of interest, most often with his dear friend, Keith.

His courageous spirit extended into his free time as well. At the tender age of eighty, Jim Helton jumped out of a plane! He bungee jumped, skydived, did cross-country ski, and scuba diving to name a few. He enjoyed the great outdoors, almost as much as he loved his family and the Navy. No day was complete before he was outside, taking count of animals and birds, hiking, golfing or skiing. He enjoyed getting together with friends and was known for telling great jokes. He always looked forward to getting together with The Old Timers, particularly on Veteran’s Day at Denny’s.

When Spring arrived, Jim would head up into the Rockies to his beloved mountain cabin he named, The Eagle’s Nest. Up there, Jim enjoyed beauty, peace and solitude. It took him many years with the help of his friend Keith to build his personal Shangri-La. His children and grandchildren share fond memories of his special place. He hosted many friends as well who gathered for fellowship and the great night sky.

HOOYAH!
Jim would go out of his way to help others, whether he knew them or a complete stranger. He inspired his family to work hard and excel, to never give up, to be of service and to stand tall with dignity.

Room: Gather at Staging Area "A"