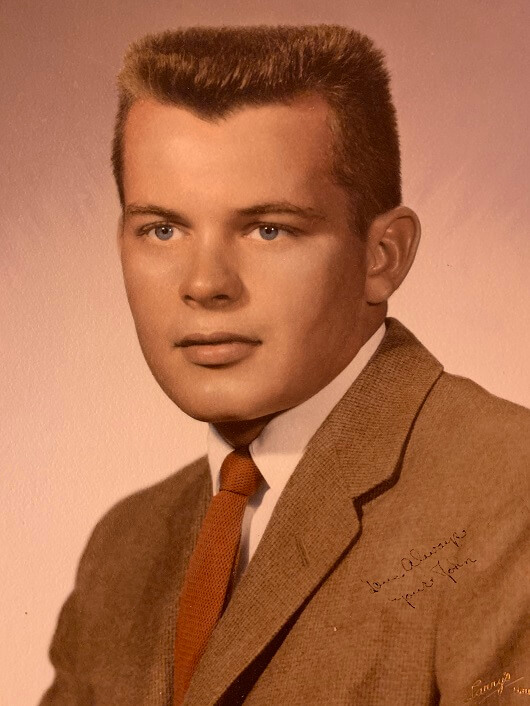 The youngest of 7, John spent the beginning of his life on the family farm in Spring Hill, Kansas developing a love of animals and nature that would follow him thru his life.  From his horse Rock to his pet squirrel Blinky to his favorite dog Tanana, John was always prepared for whatever animal one of his five children might bring home without warning.

John graduated from Spring Hill High School and joined the Coast Guard at 17 years of age.  Although very humble about his time with the Coast Guard, his family is extremely proud of the 2 years he spent serving his country.

John attended Fort Hayes State University for a bit after his time in the Coast Guard but found that college life was not for him.  What he did find though, was a beautiful nursing student who would spend the next 60 plus years sharing his life with him.  John met Esther Schumacher one fine day in 1957 and married her on August 27, 1959.

John fell in love with Colorado when he traveled here for a square dancing competition when he was 14 and after marrying Esther and having their first child he decided to move his little family from Kansas to Colorado where they would stay and make their home.  It was here that John would find a job at Coors Brewing Company from which he would retire after 37 years with them.

John loved to camp, hike, and spend any time he could exploring Colorado and national parks with his family.  He leaves us all with amazing childhood memories of Cottonwood Lake, Pitkin, Zion, Bryce and the Sand Dunes to name just a few.

A sports fan his entire life (he lettered in high school football…twice) John enjoyed watching the Rockies (well, not so much recently…but…can’t have everything I guess) and the Broncos.  But more so than that he loved watching his children and grandchildren play sports and did his best to attend as many of their games as possible.  No small feat for a man with children and grandchildren who played sports year round.

John is preceded into the next chapter of his journey by his parents, John and Mary Calderwood, brother Allison Calderwood, sisters Dorothy Mosley, Barbara Jean Spies, Mary Helen Hendrix and Elizabeth Graham.