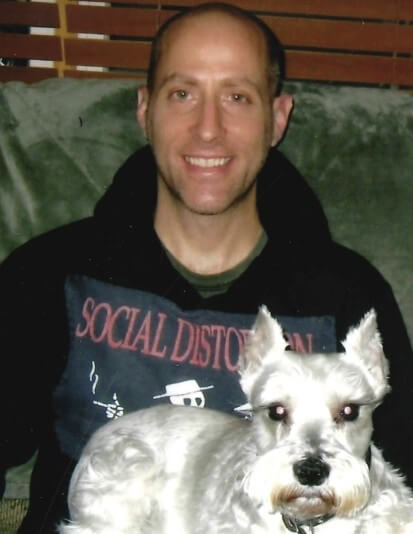 Kevin Day, cherished son, brother, uncle and unforgettable friend, passed away on April 29, 2019. He was born on January 19, 1975 and was the son of Jim and Linda Day. Kevin grew up in Henderson,  just north of Denver, graduating from Brighton High School, where he was a skilled wrestler. He attended Colorado Mountain College, eventually graduating from Metropolitan State University with a degree in Criminology. Described as a deeply sensitive and exceptionally kind soul, Kevin was a gifted artist, graphics designer and photographer, as well as a talented piano player.

He had a wicked sense of humor (often displayed in his creative Halloween costumes). He taught his younger cousins to whistle and do back flips on the trampoline, and they spent hours together laughing so hard their heads would hurt. He will be deeply missed by his family, many friends and co-workers, who describe him as one of the nicest people they knew.

He enjoyed traveling and had recently traveled to Guatemala where he became intensely interested in the ancient ruins and hieroglyphics. He loved history and antiques (and the stories attached to each one he owned). He was especially proud to live in one of the oldest buildings in Denver, above the Tattered Cover bookstore, where he spent hours reading and adding to his large book collection. He had a quirky interest in the 1950s era, often dressing as a Greaser for fun with his friends. He was an avid bicyclist, even relying on bicycles as his sole mode of transportation.

He worked for Horan and McConaty for many years, where co-workers describe him as one of the most helpful employees at the business, who seemed to know instinctively how to comfort people and provide the best help at the right moments.

Kevin was in the process of starting a new business called Tantrum, with his business partner Christina, a wellness center concentrating on meditation and experiential therapy.

He is survived by his parents; his sister Kelly Polak & her husband, Shaun; nephew Sawyer, niece Emily and step-nephew Ryan; friend and business partner Christina Campbell; and many, many friends and aunts and uncles and cousins.

A Memorial Service will be held on Saturday, May 11, 2019 at 11am at the Horan & McConaty Family Chapel, 9998 Grant Street, Thornton Colorado.

Donations may be made in Kevin’s honor to Tantrum, for the Day’s Gift Fund.