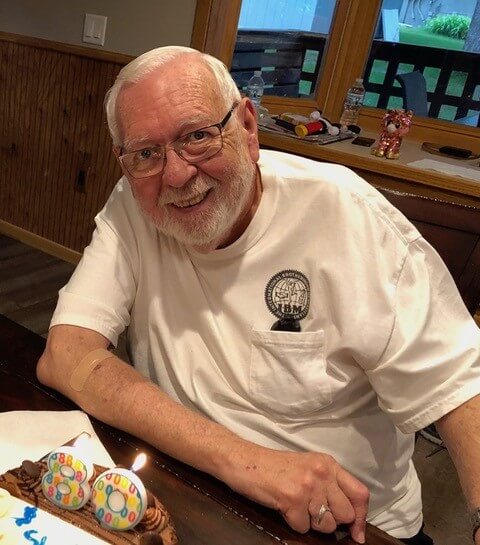 Born in Yankton, S.D., Lindsay lived a long, rewarding life. Well, until recently. Two months to the day after his 80th birthday, he was diagnosed with liver cancer, which is how he eventually ended up in this obituary section. Enough about that.

He was predeceased by his father, Arthur; mother, Loretta; younger brother, Curtis; several magic rabbits, and beloved dogs Nikki and Seiko. He begrudgingly went to his grave wanting one more dog.

He grew up in Sioux City, Iowa, and is a graduate of Marshall University, Huntington, W. Va., with a BA in journalism.

In April 1963 en route to Singapore aboard the guided missile cruiser USS PROVIDENCE (CLG-6), Lindsay participated in the U.S. Navy’s “Crossing the Line” ceremony, an infamous day-long event signifying the crossing of the Equator. Those who have never crossed are known as “Pollywogs.” Those who “survive” become “Shellbacks.” Lindsay is a Shellback.

In the summer of 1964, Lindsay climbed to the summit of Mt. Fuji in Japan. He slept overnight in a hut about three-fourths of the way to the top. The height? 12,365 feet. It was an eight-hour climb up, a four-hour descent coming back down. (It’s all volcanic ash, you know.)

In the first five years after they were married in October 1967, Lindsay and Donna moved five times involving three interstate moves: Colorado, Idaho, and Arizona. Surprisingly, Donna stayed with him through all of this.

On a trip to Hawaii in 1995 to celebrate Donna’s 50th birthday, Lindsay and Donna were on a deep-sea fishing expedition off the coast of Maui. Lindsay caught and hauled in a tuna. It would have easily filled two cans.

Lindsay had several favorite movies, which he quoted often. Those movies include The Wizard of Oz, with Judy Garland (“No you can’t see the Wizard, not no how, not no way.”); Stripes, with Bill Murray (“Lighten up, Francis.”); and Road House, with Patrick Swayze (“You don’t look so tough to me.” “Opinions vary.”).

His most common phrase was “Dammit Donna!”, which will perhaps be his longest running joke. He maintained his sense of humor to the very end, using his legendary “squeaker” to prank the doctors and nurses. He liked to say his tombstone would read: “I told you I was sick.” Clearly he was a man of his word.

Services will be held on Friday, December 6th at 1 PM at Horan & McConaty’s South Metro/Centennial location (5303 E. County Line Road), with a reception featuring light refreshments to follow. Prior to the service Lindsay will be laid to rest with military honors in a private ceremony at Fort Logan National Cemetery.

The family greatly appreciates donations made to these charities in Lindsay E. Smith's name.