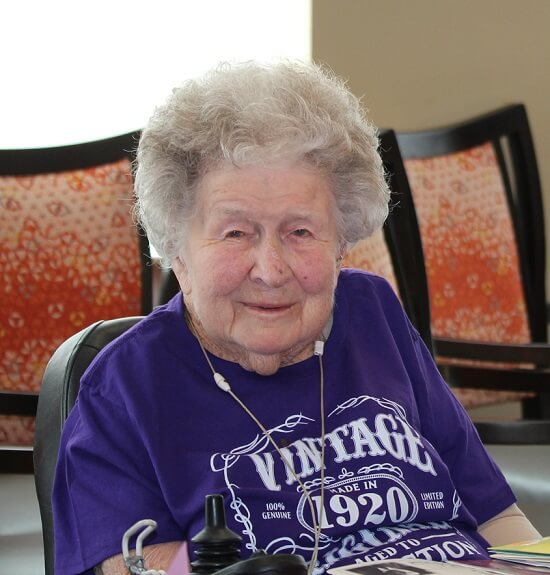 Lorraine Louise Baiocco Keck was born to Raymond and Helen Tice in Beloit, Kansas on September 11, 1920.  She had four siblings, Margie, Edgar, Paul and Patricia.  The family moved to Denver in 1923. Lorraine attended St Louis Catholic grade school and St Francis de Sales High School where she graduated in 1938.  She attended Loretto Heights College for 2 years and always dreamed of finishing a 4 bachelor’s degree. She married Anthony James Baiocco on June 9,1946. They had 3 children Raymond Anthony, Donna Rose and Stephen James. While Lorraine was a stay at home mom, Tony began his own business in the 1950’s, Brentwood Music, which became a family business after his death on August 3, 1972. Lorraine managed the accounting for the business until she was in her 80’s.

She married Lyle Douglas Keck on Sept. 3, 1977. Life during this chapter of her life was filled with family, dancing and travel as she dragged Lyle across the globe. They lived a full life until his death on Feb 14, 2007.

Since that time Lorraine lived in independent and assisted living facilities, always enjoying the activities and outings. She was known to one of the first people to sign up for any event and the most frequent attendee.

She passed away after experiencing a slow decline in her health on September 3, 2019 which would have been her 42nd wedding anniversary to Lyle and 47 years and one month to the day after Tony’s death. She wanted to see her 99th birthday on September 11th . She missed that milestone by only a few days but the writer of this obit thinks it is because her previously deceased loved ones offered her a better party… with dancing!

Please share you memories of Lorraine and condolences for the family by signing the guestbook below.