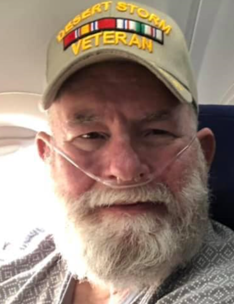 Randy R. Saubert, 63, husband of Jacki S. (Yoder) Saubert, passed away surround by his family Thursday, February 6, 2020 at home in Aurora, Colorado after a courageous and lengthy battle with ALS for 26 years. Born December 5, 1956, in Muncie, Indiana, he was the son of the late James A. and Marcella (Geyman) Saubert.

Randy attended Yorktown High school, Class of 1975 and then served for 11 years in the U.S. Army. He served during the Persian Gulf War where he contracted ALS. He later worked for 11 years at Chrissy Fowler Lumber Company, in Colorado Springs, as a truck and fork lift driver. Jacki and Randy married in 1978 and were married for 41 years. In his spare time, he was often seen fishing with his grandsons or playing with his RC cars. He is survived by his son, Jeremy of Pueblo, Colorado; daughter, Misti Woltz (Kenneth Woltz Jr) of Aurora, Colorado; two grandsons, Kaleb and Ethin of Aurora, Colorado. He is also survived by his siblings, Charles, Alfred, Nancy, and Shirley, and by 8 nieces and nephews. In addition to his parents, he was preceded in death by 2 nephews.

Those who wish to remember Randy in a special way may make donations in his memory to the ALS Association.

The family greatly appreciates donations made to these charities in Randy Ray Saubert's name.