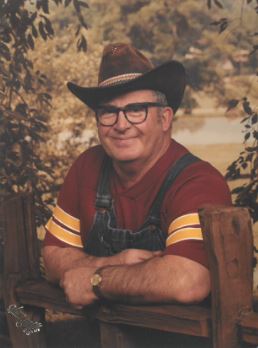 The family moved to Noti, Oregon where Dick helped them farm and ranch. He also worked with his Grandpa Robbins in the logging business. The family went back many summers, living in a tent house in the woods to help his grandpa with the logging operations after his move to Denver.

With World War II coming, Dick joined the Army in August of 1940. He served with the Asiatic Pacific Group stationed in the Aleutian Islands in Alaska. At the end of the war, he was sent to Cheyenne, WY for training as a meat cutter. On a trip to Denver CO for training , he met his future wife of 62 years, Frances Mary Gerze. They were married September 11, 1944. They lived in Cheyenne until his discharge from the Army, in August of 1945.

They then moved to Denver (Globeville) where Dick worked in the meat packing plants for the next 35 years. He then worked as a custodian at the Jefferson County Public Schools until his retirement.

Dick loved his family very much. He was willing to work very difficult jobs to take care of them. In his leisure time he loved to be outside. He really enjoyed family visits, fishing, hunting, vegetable and flower gardening, and cooking. Well into his 90’s it was common to find stacks and stacks of his homemade pizzelles in his kitchen at Christmas, or to find him working on his prized Hibiscus flower in the summer. He also loved watching the Bronco football games, and old western movies. Fiercely independent he enjoyed these things and many others at home until he moved into Mountain Vista at the age of 96.

He is survived by his four children, Frances (Jim) Bingham, Richard (Chris) Grupp, Robert (Bethany) Grupp, and Georgia (Dean) Teter; nine grandchildren and thirteen great-grandchildren. He is and will be missed forever.

He is preceded in death by his parents; his wife, Frances; his sister, Pauline Smith, and her husband Clarence.

Please share memories of Richard and condolences with his family by signing the online guestbook below.