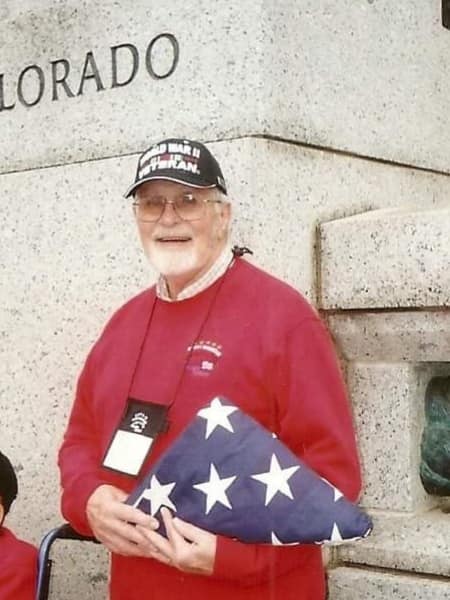 Richard (Dick) Lee Mortimer, age 94, died peacefully at home on Tuesday, March 10, 2020.  He was born on January 7, 1926 in Pittsburgh, Pennsylvania to Lee Finley and Anna Mathilda (Moore) Mortimer. Dick enlisted in the Navy during WWII when he was only 17 years old and served until the war came to an end. He returned from service on the Queen Elizabeth and remembers sleeping in the empty pool.  He graduated from Penn State University in 1951 with a degree in Mechanical Engineering; he was the first in his family to attend college.  He met his wife, Lorraine Dolphin, at Penn State and they eloped on March 8, 1952. Dick and Lorraine lived in Pennsylvania, Connecticut and Colorado during their 68 years of marriage.  Although he never pursued a patent for his many clever inventions, he made similar devices to those that were marketed years later.  Dick worked as an engineer at Pratt & Whitney, Waterpik and Lockheed Martin (formerly Martin Marietta) on the Peacekeeper ballistic missile program until retiring in 1991.  He had taken advantage of an opportunity to buy an Aamco Transmissions shop in 1969 and moved the family out west to Colorado where he later got the job at Martin Marietta. He loved the Colorado mountains and escaped every week-end possible for hiking with his beloved dogs, camping, hunting, trail-bike riding, snow shoeing or cross-country skiing, depending on the season.

Dick’s greatest joy was his family.  He is survived by his wife, Lorraine; his children Gary (Cathy) Mortimer, Pamela (Rick) Stager, Mark (Doreen) Mortimer, Lisa (Joe) Kesting, Larry (Susan) Mortimer; his two sisters, Patricia (Jim) Smith of Pittsburgh and Helen (Harry) Stevens of Minnesota; his grandchildren Elizabeth, Michael and Peter Mortimer, Nick (Katie) Stager and Stefanie (Jason) Landers, Travis (Laura) Mortimer, Amanda (Jacob) Wipf and Kenny Kesting, Lee (Ashley) Mortimer and Christy (Shawn) Collins; and six great-granddaughters:  Zoey, Olivia, Eve, Sophia, Rose and Lena.  Dick is pre-deceased by his parents, his sister, Mary-Lou Humbert, of Pittsburgh and his son, Lee Mortimer.  After the devastation of losing Lee, along with Lee’s girlfriend, Mary, to a drunk driver, Dick became involved in the MADD chapter in Denver by speaking on Victim Impact Panels and eventually holding office.  Lee shared his father’s love of the mountains and adventure.  Dick had many interests, including graphoanalysis, his ongoing fascination with maps, his collection of tools (as he didn’t want to pay anybody to fix anything!), and his health fads (e.g., carrot juice, bee pollen, hanging upside down, cod liver oil).  He was known for his sense of humor and constant joking, even when rushed to the ER or unable to get up from his chair.  Some of the expressions we will always associate with dad: What in the Sam hill? ; quick as a bunny; like a herd of turtles; whippersnapper; I was in the bloomin’ navy.

A Memorial Service has scheduled for Friday June 5, 2020 at Horan & McConaty, 5303 E. County Line Road, Centennial, Colorado 80122. A military internment will take place at Ft. Logan National Cemetery  at 1:15 pm on June 5, 2020.  In lieu of flowers or donations, help a friend or neighbor and cherish your family as much as Dick cherished his.