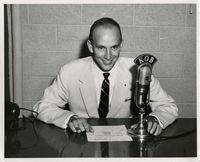 This is a homecoming, not a death. Connie has just changed addresses.

As a believer and man of deep faith, Connie Alexander went home to our Heavenly Father on September 7, 2019 with family close by.

He was born on May 26, 1929 in Dallas, TX to Weldon C. Alexander and Thelma Katrina (Andersen). The family moved to Albuquerque in 1946. Connie proudly served in the US Airforce, stationed in Enid, OK. He attended UNM and graduated in 1955 with a degree in speech and journalism, which he skillfully put to work in a long-lasting career in sports announcing. He was especially renowned for his ability to call live play-by-play. A large digitized collection of his announcing can be found on the internet. Connie was inducted into the Albuquerque Sports Hall of Fame in 2003. He enjoyed playing golf and competed in many tournaments across New Mexico and Texas. He was married in 1957 and became a loving father to three children, Gregg, Lynn and Amy. Connie was also proud of his banking career, where he attained the downtown (main) branch manger position working for Albuquerque Federal Savings and Loan. After retiring from that work he developed raw real estate, “from the ground up.” He served that local community in many ways, not least of which was his drive in spearheading and leading marches against crime and drugs in the area.

He is loved and survived by his three children, six grandchildren, and one great-grandson. Also his sister Lollie Yvonne (Vonnie) Griffin, of Orlando, FL. He will be missed for his humor and strong Christian beliefs.

Services will be planned by his family and held at a later date.