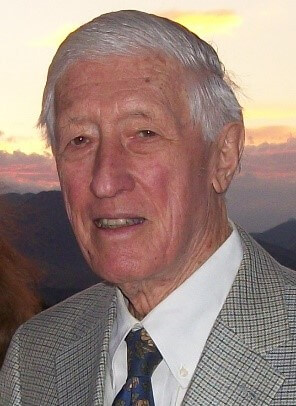 William Richard Smith, of Centennial, passed away peacefully on February 26, 2019 at the age of 94, surrounded by the love of his family. Bill was born on January 11, 1925 in Eagle Pass, Texas and was the son of Luz Gonzalez and William A. Smith. He was predeceased by his brother Lee.

Bill was an Eagle Scout and joined the U.S. Marines in WWII and served in intelligence as a linguist and interrogator on various islands during the Pacific campaign as part of the famous 1st Marine Division. He was wounded and was awarded the Bronze star and Purple Heart. After the war he attended the University of Colorado on the GI Bill and became a petroleum geologist and cartographer, specializing in the new field of photogrammetry.

While working for Atlantic Refining Company in Corpus Christi, Texas he met and married his loving wife of 65 years, Mary Louise Smith of Austin, Minnesota. They settled in Denver where Bill worked for several oil exploration companies and eventually formed his own company with offices in the original Petroleum Club building in downtown Denver.

He was a true renaissance man – a Latin percussionist, jazz pianist, artist, skilled leather craftsman, passionate collector, Bonsai gardener, avid photographer, rock hound, world traveler and inventor with several patents. He spoke numerous languages including Spanish, Hebrew and Japanese, and could give a rousing toast in a dozen others. He was an active member of Denver’s Petroleum Club, Pan American Club, Bonsai Club, Town Club, Press Club and Church of the Risen Christ. His patented and handmade leather ‘Put-n-Stay’ paperweights were the prized reward for industry luminaries who spoke at Petroleum Club luncheons for over 45 years.

A funeral mass will be held at Risen Christ Church, Tuesday, March 12 at 10:00 am, followed by a reception.

In lieu of flowers, donations may be sent to support.woundedwarriorproject.org

The family greatly appreciates donations made to these charities in William R. Smith's name.